The Committee on the Financial Aspects of Corporate Governance was composed of: 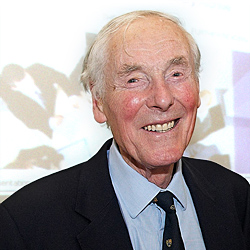 Sir Adrian was educated at Eton and King's College, Cambridge, and represented Great Britain in the coxless fours rowing at the 1952 Olympic Games in Helsinki. He served as Deputy Chairman and Managing Director of Cadbury Schweppes from 1969 to 1974, and thereafter as Chairman until 1989.

He has also been a Director of IBM UK, chaired the CBI's Economic and Financial Policy Committee, and was a one of the Directors of the Bank Of England from 1970 to 1994.

Adviser to the Governor, Bank of England

Chairman of the Financial Reporting Council

Vice President of the Institute of Chartered Accountants, Scotland

Chairman of the Institutional Shareholders Committee

Vice-President of the Law Society

President of the London Stock Exchange

Chairman of the Institute of Directors

The Cadbury Archive at Cambridge Judge Business School consists of papers compiled and preserved by Sir Adrian Cadbury from his time as Chairman of the Committee on the Financial Aspects of Corporate Governance.

For more information about this archive or to enquire about access to original documents, please: